Discussion on technology and art

I just wanted to draw your attention to this post on David Apatoff's blog: Revenge of the Titanic.

He raises some interesting questions about the significance of technology in art, and seems to suggest that digital art technology will fundamentally change the nature of art itself.

I tend to believe that human-ness is what makes art art. Technology may enrich and enable, but not change the nature of art.

In the wake of this New York Times article on sponsorship of bloggers and social media contributors, let me state emphatically that this blog has not taken a dime from any sponsors. (As if!)

It's not for want of trying. I've made a few half-hearted attempts to monetize this blog, to use the term of art, but so far, all efforts have been for naught. (I'm open to any suggestions.)

If the situation changes in the future, I'll be sure to let you know. But for now, though you may see ads alongside the posts here, rest assured that you're getting pure content, unadulterated by any sponsorship or other commercial interests. (Well, except for blatant self-aggrandizement on the part of the author.)
Posted by Unknown at 3:36 PM 0 comments

I've been thinking more about the graphics pipeline, which I wrote about here. Sometimes a picture is worth a bunch of words, so here's a simplified diagram that may explain the idea better: 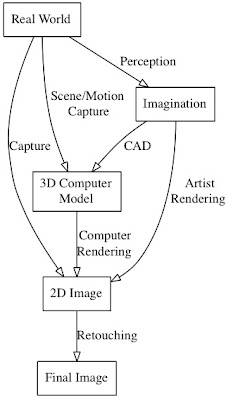 The particular inspiration for my current thinking was a documentary, The Pixar Story, currently airing on Showtime. This hour-and-a-half film gives a good overview of the evolving technology of computer animation, as well as the histories of some of the major players. It's worth a look.

On another blog, I posted about Taxonometrics, the measure of how well various organization schemes can classify and categorize information to make it accessible. This is certainly relevant to art, which encompasses much of the on-line content that is the subject of all these attempts at classification.
Posted by Unknown at 2:43 PM 0 comments

The gradual erosion of creators' rights to their creations is as good a topic as any for this forum, for it certainly sits right on the frontier between art (or at least creativity) and technology. The recent kerfuffle over the Amazon Kindle 2 text-to-speech feature highlights this. Briefly, the second version of Amazon's electronic bookreader introduced the feature of automatically reading books out loud. The Author's Guild and others jumped on this, seeing it as an infringement of the audiobook rights for the books in question. In the face of this, Amazon backed down somewhat, and said the publishers' permission will be required for the speech feature to work.
But this is only the latest salvo in the escalating war between technology and creativity. The disturbing trends for authors, artists, and other creators are twofold:
The evidence of the first issue is the gradual erosion of the music recording industry, the newspaper industry, and others. As it becomes harder and harder to attract readers to paid content, it likewise becomes harder to attract advertisers, so revenue dries up. Why can't free content be paid for by advertising? That's pretty much what everyone's counting on, but so far, it's still just optimism. Also, the advertising model is at risk because of the second trend.
As more and more people scrape content from other Web sites, piece it together, re-package it, and present it without attribution or back links, that content gets stretched thinner and thinner, so the likelihood of its earning any ad revenue for the creator diminishes.
I'll talk about all these in more detail later, so this is just an overview. But, I'll throw out one more nugget for thought: Shepard Fairey. In a sense, Fairey represents both sides of the coin. He's the creator who wants unfettered use of other assets as sources. But he also staunchly defends his own intellectual property rights. This duality goes beyond his celebrated Obama image. You can read more about it here.
Posted by Unknown at 5:10 PM 0 comments

Some folks might be interested in the Data + Art exhibit currently at the Pasadena Museum of California Art. Subtitled Science and Art in the Age of Information, this appears to be an exhibit of work related to data visualization and other forms of data expression. To quote the blurb on the exhibit page, "These interpretations of data will empower the average person to see the invisible, hear the inaudible and understand the impossibly complex."

The exhibit runs through April 12.
Posted by Unknown at 11:53 AM 0 comments

Declarative vs. Procedural Formats (and farewell, Freehand and PostScript)

About two months ago, I posted a short note about Gaussian distributions and their uses in, for example, simulating airbrush painting. I included a couple of sample images based on an implementation I wrote in the PostScript programming language.

PostScript was interesting in that it was a full programming language that was designed to run on the printer. In other words, back in 1984, the printer ceased to be just an output device (WOM - write-only memory). It became a programmable computer that was part of the workflow.

PostScript was extremely successful, and in many ways revolutionized the printing industry. However, because all programs are susceptible to bugs, and bugs in a printer were difficult to trouble-shoot and correct, some PostScript workflows had problems. This, among other things, led Adobe to try to find a more stable print format. What they arrived at was a subset of PostScript in which everything was pre-defined so that no custom programs would be running in the printer. This format had been developed for use as Adobe Illustrator's particular dialect of PostScript, but Adobe now called it Portable Document Format (PDF), and began pushing that. In fact, they let PostScript languish, and have not added any new features or updated the language since PostScript 3, about 10 years ago.

So PostScript is procedural. There are some built-in operators for drawing basic shapes, images and text. But most PostScript documents are really programs that use procedures to describe the appearance of the page. Even fonts are procedures in PostScript.

Since procedural formats are prone to bugs, developers often react by seeking a declarative format, such as PDF. Everything you can put in a PDF is spelled out in the definition of the PDF format, and programs and devices that receive PDF are supposed to know what to do with all that stuff.

The problem with procedural formats, though, is the same as the benefit. Everything's spelled out in the definition. You can only do what's in the definition. The airbrush simulation I talked about would not be possible in PDF, because it relies on procedures. Now Adobe or others could define an airbrush feature in PDF, but then a new version of PDF would have to come out, and all the software and devices that can receive PDF would have to be upgraded to add this feature. More importantly, if you wanted to send an airbrush PDF document to someone, you would have to know if they already have upgraded hardware and software to be able to handle it. PostScript doesn't have this problem because the airbrush feature uses the PostScript language, so any PostScript language receiver would process it.

Oddly, later versions of PDF are adding features to support scripting and Flash, which are procedural. In other words, having gone to the trouble of cutting the procedural aspects of PostScript out to make PDF, PDF is now being made procedural again.

In the same way, the HTML standard that was developed for Web pages has been augmented with Java, JavaScript and other procedural content intended to add that programmability back into a format that was deliberately kept declarative. So maybe we should just admit that data formats, for the Web and for printing at least, have to include some procedural elements. Purely declarative formats are just too inflexible.

While I'm waxing nostalgic for PostScript, I'll also tip my hat again to the late, lamented Altsys Aldus Altsys Macromedia Freehand program. Among its many great features, this competitor of Adobe Illustrator allowed users to specify PostScript for each shape that was drawn, so you could create your own effects (e.g., airbrush) in PostScript, and then use them for any shape created in Freehand.